We can repair and maintain your remotes to ensure proper functionality.

Dedicated, professional, and affordable, our acclaimed company can repair and install your garage door.

This garage door company has an ever growing clientele and delivers commendable results by proficient technicians.

There are things like washing machines or driers that most people have a basic understanding of. If they stop working, you check for broken pipes or leaks and such, but what about garage door springs? They do not break very often, so most people never give them a second thought. So to prevent the dangers of ignorance, we will give you a brief rundown of these important mechanisms. The Magic of the Torsion Spring


This system works using springs that are wound very tightly and are attached to steel shafts with cable drums attached to them. The entire thing sits on the header wall. Upon it are three support systems which consist of a bearing plate in the middle with two at either end of it. The springs are made of steel, a super tough metal.They are formed with a stationary cone and a winding cone at their opposing ends. The stationary cone attaches to the center bearing plate. The winding cone has lots of holes used for winding them up and for screws to pin them down. Counterbalances attached to the roller brackets attach to the cable drums, so when the door is opened, all of the stored tension in the springs lift it up and the spring unwinds and moves the roller. Closing the door is the same but in the opposite direction.

You can use this type of spring instead of torsion in some cases. This works using springs stretched out and sitting parallel to a horizontal track. It uses pulleys and counterweights which run the height of the door from the corner brackets to the pulleys. So when the door opens, these springs tighten up, releasing all of the stored up tension. 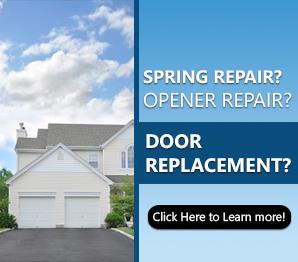 Our services in Port Richey